[EN] Here is the second part of the interview to Lou Quinse. The first part is available at this link. 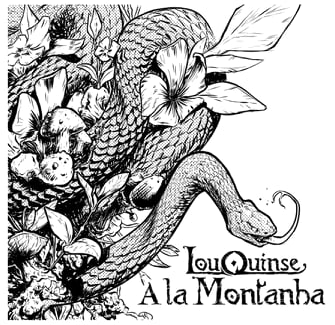 Many of you are part of the punk hardcore scene. A much more “enveloping” environment, all-ecompassing from a certain point of view, surely more meaningful than the metal one, which is made by some occasional events and a more shallow and commercial lifestyle. How do you bring hardcore and a DIY attitude into your musical project?

You’re surely right when you say it’s an enveloping environment, in fact it brings us in, and not the contrary!
Fact is that when we were young metalheads and we started, 15 years ago pretty much, in Turin there was a club scene which borrowed a lot from the punk scene in practical and attitudinal sense, so we lived in a sort of golden bubble with a certain level of self-management which made us think everything was like that. Such a shock when we started hanging “outside”, often among exploiters of any kind, sketchy places and hyper-competitive bands!
Then thanks to the NoTav struggle we got closer to the punk and DIY scene. We first attended sporadically and then we became a part of it, and we learnt that fun, relaxing and enjoyable gigs could really happen, that we could exchange ideas and info with others, that the money you make at an event don’t have to make the living of someone who decided to exploit the passion of young metalheads to live, but that they can be used to help comrades in need, the struggles, to make a radio and productions live… and who stops now?
Then if from the side of playing live you could play in bad conditions but at least you could play, from the “record” side we lived and live a much more extreme and frustrating situation: in our experience who says that is able to fully produce your work is a scoundrel who doesn’t contribute in anything creative and useful, but who is there only to get money from you.
Self-production for us means to handle our work completely, to learn seriously (more or less) to do that, to plan it, to enter the absurd mechanisms of the so-called music industry and understand them.
And also, mostly co-producing, cooperate: our albums are a work that goes way beyond who plays them, which involves in a horizontal way graphic designers, artists, sound engineers and independent labels, who are free to express themselves in something truly shared.

Honestly, as it often happens, we’re a bit late in reading the phenomena around us! We’re seeing tons of great bands releasing good quality music and having an excellent political attitude, which makes us happy.
It is truly noticeable that in all genres that are part of the metal music, it’s in Black Metal that you have a movement that defines itself on the bases of its content and revolutionary approach.
Of course, you have bands like this in any subculture of our huge family, but to see the birth of opposition and a different way of seeing things in a scene so ravaged by the far right, it’s truly inspiring. And we are seeing this happening in a reciprocal way with the audience too: there are many comrades that begin to find an interest and passion for black metal, which is something that a few years ago was impossible to imagine, and this is definitely because of the new sense that RABM is injecting in the scene.

You are often vocal about your political positioning, both through your original lyrics and in re-doing traditional anarchist songs. How much is important for Lou Quinse to express your ideas? What other choices connect your production and your political life?

Actually, in all of our production we only have one original lyrics, which is the “Giga Vitona” one, while all the others are lyrics taken from the various repertoires we take inspiration from. In this sense what we do is basically that we pick a version -because in traditional music the songs are sung in different ways- and then we modify it slightly, often replacing religious exclamations with profanities!
Lou Quinse has its own ideas, which are also ours, but mostly its. Let me explain: we re-interpret and report themes that are not ours in the original sense, but which derive from other people before us, people who underlined and sang about the injustice and rebellions of their times, which still have, in our opinion, a universal and active value, despite the passing of time.

We feel then to support all the musical self-managed projects, compilations, gigs, free radios, DIY punk and metal, which are the places for cultural re-appropriation and for partying of the exploited ones.
Militancy is on the other hand, a personal and individual topic (consider that only as musicians, through formation changes and the development of things, no fewer than 16 people are and have been Lou Quinse!), which affects the band through propositions, participation to events, the active friendships, the share of common interests.

Antifascism should be the lowest common denominator of any decent band. And up to here, in the “left”, I think we all are there, from the liberals to anarchist and communist bands. What can define a truly revolutionary metal scene in your opinion? What could make the difference between a “leftwing” alternative market and a truly revolutionary scene?

(Drugs) The revolution! Only suppressing the capitalist system could really make us free to play music to play music, without the market dynamics and other horrors. Then it is up to anyone to consciously choose a revolutionary ideology also to do this, also to seize the possibility to make music freely.
We think that in order to live our presence in the metal scene in a revolutionary sense, we must renounce delegating.
The bands find themselves alienated too often from the creative process, relying on scoundrels and exploiters because they can’t conceive a separation between the medium of money, of the label, of the booking agency, to affirm their own aesthetic (or not) ideas.
In this sense, luckily, in the last years, we’ve seen encouraging and positive examples, which bring our hopes up.

You published 2 albums and an EP. Which news are you bringing to us?

We recently have published a recording of a radio session we made in April 2021 for the Radio Blackout’s Home Jam broadcast.
This was only a digital release that we called “Ecce! Equus viridis” and it was a “pay-what-you-want” initiative for the free radios.

Between May and June, we will also release a 7″ EP with two songs, a small work in terms of timing but that involved the work and cooperation of many friends: sound-wise it is recorded by the always impeccable Tino Paratore, and this time it is not only mastered but also mixed by the master Tom Kvalsvoll, the guru of the most extreme Scandinavian sound.
The artwork, which we are eager to reveal, is made by Davide 0.Lo Mat Di Vincenzo, as we did for “Lo Sabbat”, while lettering was made by Giulia Salvatore, which worked on the artwork of “Ecce! Equus viridis”, and for the first time we will work with a DIY serigraphy, thanks to HvLab and to our friend Desi, while Marcello Ruvidotti, the author of the “Lo Boier” music video, is already working on some scripts… so a very exciting collective work to which we add the participation of many independent labels for co-production and distribution.

Musically and inspiration-wise this wants to be the testament of the formation who enlivened “Lo Sabbat” and at the same time the first step of the current one, before we travel on a long trip towards the course of the immigration from the south of Europe to the American continent and back…

We lately have been impressed by the album of folk blacksters DUIR and from the sci-fi performance of “La Morte Viene dallo Spazio”, while on the folk-contaminated side we suggest the very traditional duo Brotto-Lopez from the Occitan region and the stoner-esque CxK whom we are listing to lately, as well as the Mongolians The Hu and Suld, the first albums of the “blundered” Epirotes Villagers of Ioannina City, and the ritualistic deutsch-danish-norwegian Heilung, just to throw in some sprightly worldwide names, moderately mainstream. For the rest, we listen almost only to dead bands, better if DIY.

So we came to an end, anything to add?

Can we say “For Satan, for Anarchy” in an interview?

Remember to set a reminder for the EP Premiere (link here)!