[EN] While we wait for the new EP “A la Montanha/Lo Barban”, premiered by the Antifascist Black Metal Network on the 18th of May at 17 (GMT+2), we propose an interesting conversation with Lou Quinse, populous folk-black band with a profound punk attitude, hailing from Piedmont, from the Alps, or maybe directly from the folkish struggles of Occitane.

We spoke with them about their music, but also and especially about what it means to connect music and politics, about self-management, DIY and about metal and struggle.

To make it easy we divided the chat in two parts, below you’ll find the first part, the second will be available tomorrow. 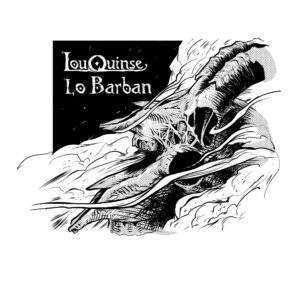 Hi comrades, do you want to tell us the story of your musical project? How, when and where was Lou Quinse born?

Lou Quinse was born in Balme, a village of val d’Ala, in August 2006, in a car (a glorious white small Panda – a well-known cheap but sturdy Italian car) during a “chiusino”, which means having the windows up and a joint each. For some years we were passionately following Lou Dalfin’s folk-rock and during that same summer, we got a copy of Malombra by Hantaoma, who mercilessly taught us how you could combine black metal with an alpine repertoire. I.Lo Bagat was learning to play the melodeon and we were thinking to build up an alternative repertoire for our already existent hardcore/thrash metal band Heretica in order to play at the Balme folk fest (Barmes Folk), that at the time we didn’t do. After a while, we rented a rehearsal room where we could play like, always, with other bands from the Turinese scene, with which we came up with the same idea but this time not as an alternative repertoire anymore, but as an actual side project of everyone, something like a “super-band”. Many people liked the idea and joined the band and we can say that we still love it.

As we deal mostly with more classical black metal and punk, we’re used to quite a standard band formation: vocals, guitars and bass, drums and sometimes keyboards or synths. However, your music is full of the most disparate sonorities. Do you want to make an overview of the instruments that compose your songs?

Our band includes bass guitar, drums, two guitars, voice and a diatonic button accordion: basically, the only traditional instrument that has been constantly present in our history.

In the 2008 “Rondeau de la forca” demo, besides this formation we had a transverse flute, thus metallic and with a more classic and soft sound, the hurdy-gurdy, the most iconic instrument of Alpine music, dry and similar to the bagpipes, but equipped with a rhythmic and hypnotic bourdon, as well as some passages with the bouzouki.

In “Lo Sabbat” on the contrary we didn’t have the hurdy-gurdy and the transverse flute, but we had the straight wooden flute, mostly, and some metallic ones too, sharper and more primitive, and we also had the boha, a little type of bagpipes.

In this album, there also are some percussions that aid the drums: djambè, surdo (which is a Brasilian bass drum), bells, both Irish and Tarantella’s tambourines, a berimbau as well as some passages with the bouzouki and a feature with a “chitarra battente calabrese” (Italian guitar).

Through the years, two bagpipers played live with us: XX.Lo Judici and mostly II.La Papessa, who since last year came back in the band with her enormous medieval bagpipes.

Musically you propose a folkish black metal that reminds the Scandinavian extreme folk (Finntroll, Svartsot, Trollfest) while it’s also a far relative to less aggressive folk metal which is also known in our places (Folkstone from Bergamo and Eluveitie from Switzerland). What brought you to this sound? Which other bands (even non necessarily metal), which inspirations?

Right, here surely an argument on the already quoted repertoire is necessary to clarify our influences. Lou Quinse doesn’t write original songs, but it arranges traditional songs that come from different collections, alpine or not, especially from the Occitania region.

In this sense then we listen to many bands and authors who, before us or at our time, kept even ancient songs alive. Speaking of this “coverisation”, surely Lou Dalfin have been masters for us. For those who don’t know them, they made covers of traditional music from Occitania, contaminating it with rock and, in general, alternative music, from punk to reggae. Being clever monopolists, they even physically and personally taught some of us how to play traditional instruments.

Considering that we, at least partially, always thought to handle metal as traditional music, mixing a lot with genres, the influences and references, anything we listened to with passion through the years determined our style: clearly you have loads of black metal also because it fits perfectly folk, but you also have thrash and thrash-hc, death metal, NWOBHM and, maybe more concealed, a lot of “post” mentality.

Speaking of real folk metal, on the contrary, if we exclude the already mentioned Hantaoma, it didn’t really influence us that much, also because it isn’t really matched by a philological work on the tracks or lyrics, but it is just usually limited to excessive use of synths and Northern atmospheres, playing as Drakkars on the Lago Maggiore. Sure, we followed passionately the second European folk metal wave, especially appreciating Finntroll, Korpiklaani and In Extremo while if we go back in time you find Ulver’s “Bergtatt” which we generally consider our favourite album, but the rhythms and melodies they base their music on are too much North Europeans compared to the Alpine music we play.

We can say different things when talking about the Italian folk scene, with which we have a beautiful relationship that leads various times to collaboration through the years: Folkstone firstly, even though they play a celtic rock again far from our intentions and sensitivity.

Lou Quinse lyrics are mostly in Occitan, even though you often have struggle songs from other parts of Italy in your albums. What is the concept behind Lou Quinse?

Naturally choosing the Occitan repertoire is not random, and also naturally it’s not related to identitarian bullshit. On the contrary, the history of Occitania is a beautiful while terrifying vicissitude of subjugation and theft, but also of heresy and resistance. Occitania saw the slaughter of the Cathars, and it is a big transnational region, which includes the diverse and cosmopolitan city of Marseille, and which never tolerated nations and borders. This music, but in general the Alpinian music, is very far from the nationalist romanticism of the ‘800 and from its ‘900’s transformation into an ideology of blood and soil: in fact, there are many songs against the States’ wars, which deprive villages of their youth and that are unleashed against other people, far and brotherly.

It goes without saying, it’s not only struggle music, it is also the music of celebration and of living communally, which often sees rebel and independent women as protagonists.

Folk music, finally, is a music which travels, and oftentimes the melodies of very different songs are the same, so you can have a mash-up of lyrics and inspirations seemingly far from each other, but in reality so close that they correspond.

For us, this was the case of the medley between the song from the northern Germanasca valley “Chanter boire et rire rire” and Emilian “La leggera”: while we start working on the first we noticed that the melody and rhythm were the same, and so that we could mix and alternate these two praises of living in idleness, which is also ours.

What we decided to add to this already rich panorama is the metal contamination, which in addition to expressing itself orchestrally, makes the atmosphere more radical and coarsed, the message more potent and dark: the right mix between a sabba and the tavern.

The music that we propose is then the music of the exploited, the oppressed, bandits and rebels.

Remember to set a reminder for the EP Premiere (link here)!