A few months ago a new meme player entered the black metal post-ironic arena: FVCK BLACK METAL. With a growing influence on Facebook and Instagram, the project combines an in-your-face approach, the overcoming of self-referential shitposting and an advanced political perspective. We caught instantly the affinity between Semirutarum Urbium Cadavera and FBM, and thus started an ongoing collaboration with the comrades behind the Central European collective.
We want to give space to what they have to say beyond their memes. Here are their words.

Hello comrades and thanks for this chat. We’re sure it will be as A MA ZING as your meme page is.

First things first: when did you decide to make a revolutionary black metal meme page? And why? There are many ways to make leftist propaganda/counterinformation online, why did you specifically choose the meme medium? 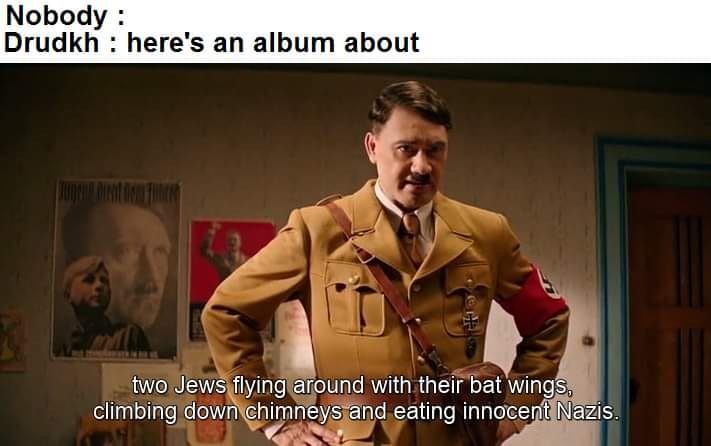 FBM: The meme page started by accident so to say, we created a fake-poster for a typical black metal festival and it went viral for a couple of days. We thought it was a great opportunity to start a page and create more stuff. From the get go our goal was to call out, criticize and mock fascists, racists, sexists, and all kind of intolerant fucks in the scene. The meme medium is great we figured as it’s a way to tackle complicated topics in a kind of light and fun way thus reaching an audience that is not necessarily involved in any kind of activism at first. Memes have been more and more relevant as a way to express one’s views and convince others – just think of how the alt right is congratulating itself about “meme-ing Trump into presidency” for instance! Not everyone is able to read and understand complex pieces of research or ready to confront themselves with political pamphlets, but it takes one second to get the meaning behind a meme and just one more to share it with others.

What are the social network which are more responsive to your contents? Are you planning to invest time in other social media in the future, or to divert more efforts on one you’re already using? What kind of feedback do you get from each and any Social Media you’re currently sieging?

FBM: We use both Facebook and Instagram, responsiveness is a bit random: some posts do better on FB and others on Instagram. The feedback we have on the whole is amazing so far: we have people texting us that they relate to our content, some ask for more information about a band or person we mentioned, discussions start in the comments or in private and in the end the result if often “fuck, I didn’t know they were terrible human beings, thank you for telling me” and THIS is exactly what fvck black metal is for. Most of our small community are fantastic people willing to share what they know and call out unacceptable behaviors in the scene… or just make fun of fash shitheads with us!

Like many other pages with a strong opinion at its core we often struggle with reports and posts being taken down by the Great Zucc and by “often” I mean there would be twice as much content on both platforms if it wasn’t for the daily reports. It’s hard to criticize the far right without ever mentioning the Forbidden Words or using the Forbidden Symbols on these sites but it forces us to be more creative in what we do. We have no back up plan so far, if both accounts get taken down I guess we will improvise or just associate with other existing pages.

Some of you are located in France, can you tell us something about the current black metal situation? Are there any leftwing bands worth mentioning? On the other side we know that nazis have always been very present in the scene, to the point of holding a real hegemony on it. How are they doing nowadays? Do they get challenged by the antifascists? 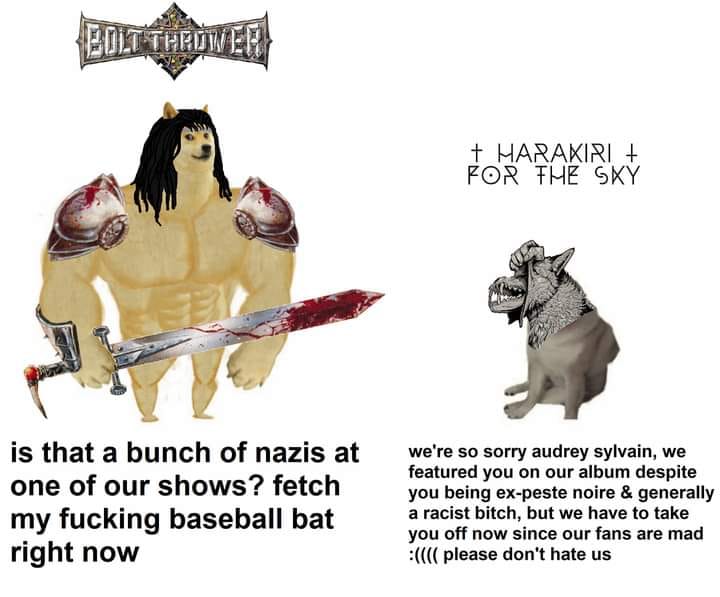 FBM: The black metal situation in France is fucking disastrous and it’s getting worse and worse. There is a strong core of NSBM bands that have been dominating the scene for more than a decade calling themselves “medieval”, “rural”, “nationalists”, “patriots” and 1500 other words they use as synonyms for “actual nazis” and no one gives a fuck. People still defend Peste Noire and Famine while being fully aware that Peste Noire directly funds the Azov Battalion – an armed extreme-right militia that actually kills people.

I’m glad we’re not in France and part of the problem is, of course, that there are loads of fashy idiots in the scene…but also that they’re being defended by people who are not right-wing at all. When you talk to them privately, they may be leftists, but once you talk about their favourite artists, they behave like they’re in a cult and you’re attacking their leader-who doesn’t give a shit about them. But tbh this happens in almost any situation in France, most of the time you just need to drop a word and watch people rant against an enemy that only exists in their own heads before trying to find a middle ground. It’s exhausting, but there are still good comrades if you know where to look-Chaos E.T Sexual just released an album and I’m not sure one can be more explicitly antifa than they are. Still, it’s unlikely they’ll be invited for big festivals BECAUSE they’re not aPoLiTIcAl. I’m more into hardcore and blackened stuff but if you’re looking for French music that’s safe, Cowards, Potence, Worhs, Finis Omnivm or Warfuck definitely make good music.

Again starting from the composition of your project -as we know that some of you are women-, how are gender related issues handled in your local scene? What are the problems you are experiencing? Is there any sort of collective answers? 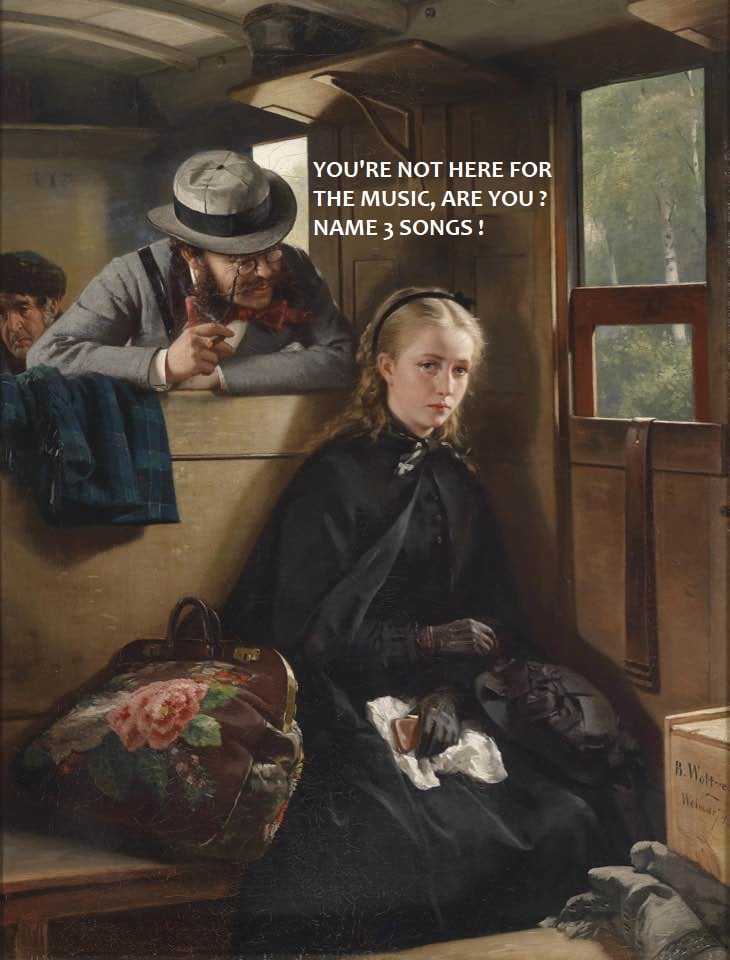 FBM: In the metal scene as a whole women are only allowed 2 roles: either you’re someone’s girlfriend or you’re a dumb bitch. None of us are being taken seriously be it as music fans, musicians, tour promoters, organizers, venue staff members… There are countless examples of very talented women leaving the scene because they got tired of fighting to fit in that fucking boy’s club that thinks you’re just good enough to be the a musician that fucked her way into the band, a horny groupie,a merch seller or a catering lady. Hell I’ve seen this kind of shit happening in so-called leftist safe spaces, and this has to stop right now. I’ve seen some initiative to fight sexism in the underground but most of them fail miserably: marketing bands solely because they have a female musician or acclaiming mediocre women because of their gender is doing more harm than good. For instance, each time we criticize Myrkur for her racist view we’re told we’re being sexist, but hey this is not how it works! A collective answer that could work in my opinion is: if you’re a man, make an effort to include us in the scene, because we’re a part of it too, not because you want a “not sexist” gold star or expect us to fuck you out of gratitude. Speak up and get angry when you’re confronted with sexism within your own scenes as well as online. And if you’re not a man: get involved, be loud, the future is ours.

A more general question: how do we, as revolutionary subjects, tackle fascism and neonazis in black metal? Is it worth it? Are there any praxis you can share with us which could be reproduced in our cities? I’m also gonna ask you if there are any perspectives for the struggle? Do you think our fight is gonna be enclosed on the Web for much longer? Do you expect that it will sooner or later come to a point in which we could challenge the nazis phisically and remove them from the Universe?

FBM: I’d say start-and for a while, stay-at the local level. Radicalize people you know, because you know how they work, because they know you, because it’s worth it and hopefully they’ll spread the word. Trying with complete strangers is not a bad thing at all but it easily backfires. People tend to take different opinions like they’re physical or personal attacks. Once you have results at the local level, they’re examples you can use outside of this local bubble.

Social media is important but as we’ve seen, leftist spaces on Facebook are mostly displays of so-called leftist infighting. We all have the same goal, and as long as we don’t try and centralize it around an authority, we can do really well (looking at you, leftist US Americans).

I see lots of people talking about armed revolution and physically fighting against bonehead parasites -which I enjoy- but everyone can play a role in the struggle. And it’s good, because it cannot be enclosed on the internet-it shouldn’t. Get out, help, protest and fight if you can, teach, cook, find Neige and take a dump in his mailbox, show what you can do or what our ideals can achieve. If it even convinces one person it’s worth it. I believe it will escalate into an open and probably armed conflict, but the more we organize on every level, the better for us.

We will gladly use our page to promote leftist initiatives and associations, antifa artists of all sorts and help like-minded people in anyway we can – drop us a line. If you’re a meme or content creator: we’ll happily share your stuff and redirect our small community your way. 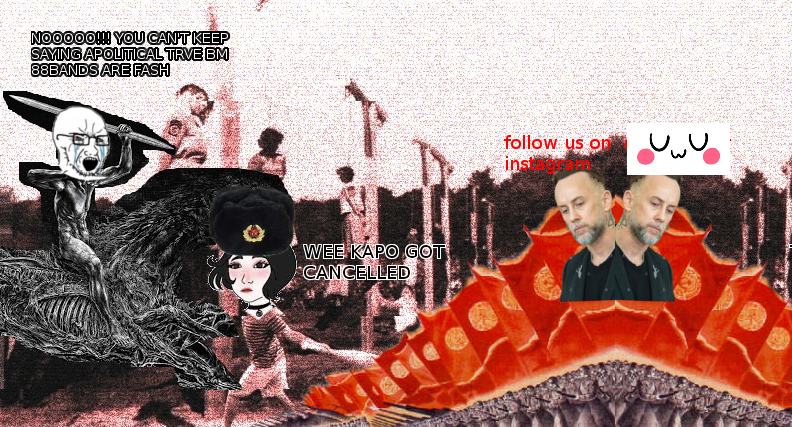