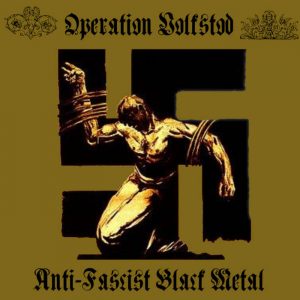 The Anarchist Black Metal band „Operation Volkstod“ from Frankfurt released in November their first full-length album. The picture on the cover shows a human tied to a swastika, beneath it the title: „anti-fascist black metal“.
The band broaches the issues of domination, oppression and the miserable conditions under which people have to live. To create an atmosphere in which the mentioned distress becomes listenable, they link the negative and nihilistic energy of 90th black metal with emancipatory ideas.

The word Volkstod means something like “death of the people”, but the German word „Volk“ implies very often that the people are „connected“ by blood and cultural heritage, so it‘s a fundamental word for racist and antisemitic ideology in Germany. German fascists say, that the left-wing want the “Volkstod”. So the bands name is meant as a joke and a provocation against the right wing

Frankfurt has not really a left metal or crust scene. Sometimes there are concerts, but metal/crust-concerts  are not very well attended.
The political situation is a little bit better. There is the FAU, an anarcho-syndicalist union, and the IABF: a general anarchist group; there also are a lot of other groups. The IABF is also part of the FdA (the german anarchist federation). There is also a strong solidarity with Rojava and the Kurds. Many protests and events were held within the #riseup4rojava campaign, but it could have been better.

Because of this situation Operation Volkstod was started in 2017 as a solo-project. In this year the first song „Utopia“ was recorded, but wasn’t released until 2018 together with three new songs on the „No Gods, no Masters“ EP.

About the future of this project: further Operation Volkstod releases are planned, but the author doesn’t want to reveal too much yet. However the relationship between humans and animals as well as sexism/gender/feminism are topics he would like to discuss, and will be treated in the future. Yet, live-shows are not planned in future, because for now there aren’t enough people with whom Operation Volkstod could play as live-band.