We asked a few questions to Etxegiña, a collective based in France/Spain who came out last year with the track “Nosotros los Etxegiña”.

Hi Etxegiña, thanks for accepting to answer our questions.

Hello and thank you for your interest in Etxegiña. I’m Waldo, founder, bass player and singer of Etxegiña, and it’ll be my pleasure to answer your questions.

Can you tell us about the state of the band as we speak? We left you at a stage where you held a few shows and recorded your first truly astonishing single “Nosotros los Etxegiña“. At that time your drummer Angus was going to leave the band. Any other news about it?

First of all, thanks a lot for the kind words. We recorded the single live at the Nidstang Studio in a couple of hours and I’m happy of the feedback we got from it. About our line-up, Angus left the band after our first couple of shows. He’s a very busy musician that will remain in our inner circle as he’s the one who mixed and mastered the single and we’ll keep recording at his studio for a while. I love the work he’s done and I have the utmost confidence that he’ll do an amazing job at helping us find the right sound for that release. Once we’ll finish the recording of our first EP, Titouan (Guitars) will leave the band as he has enough on his plate with his other projects. You need to know that the original Etxegiña line-up was 100% composed of members of Acedia Mundi, a Black Metal band I play bass for and co-founded. Some say I should have broadened my horizons and looked for other musicians but I’m glad of the help they provided me to get the band started. The most likely scenario is that I’m going to find a session drummer for the recording of the EP. My priority is for Etxegiña to exist and for that I need my first release. On the meantime I’ve already started writing new songs as I plan on releasing a split with a Brazilian band. So its is possible that a second Etxegiña release will come to life a few months after the first one. But, to get back on track, after the recordings and unless we find a drummer that wants to fill in full time, it’ll just be Quentin (Guitars) and me as official members of Etxegiña.

What do you think about the use of internet -and technology in general- to convey a political message?

I don’t see the use of internet and social media as a bad thing to convey a political message. However, I believe it can be very time-consuming and exhausting. It all depends on what your angle is, what you are looking for, who you talk to and the subject at hand. The good thing is that it’s easy to join a political community or at least to gravitate around one to evolve. I believe it is a great time for those who care to listen. If you are of humble mind and wish to know more about how semantics and your behavior affect people and communities, if you wish to make a difference, if you wish to grow you surely can. Deconstructing one’s system of believe is not an easy thing. I’ll add that in my opinion, it’s a never-ending process. That’s why I believe being an activist doesn’t make you a better person. You just have to look at how sexist and misogynist any radical leftist movement can be. Being an anarchist, a socialist or a communist doesn’t mean you can’t be an oppressor.

Would you like to tell us if you are involved in any social and/or political project – other than Etxegiña of course? 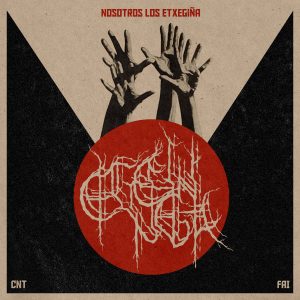 As of today, Etxegiña is my only political project. Etxegiña is not “directly linked” to any syndicate or political party per say, but we are very proud to be working with activists. The two shows we performed last year are the epitome of that connection. Our Paris gig was organized by the antifascist group Alternative International Movement (AIM). It was a night filled with people of leftist connections and some CNT affiliates. Our second gig, in Angers, was in an associative and self-managed venue called “l’Etincelle” which is very openly antifascist. We are also proud to have been featured in two compilations. The first one is NoiseRed’s “Diferentes bandeiras, o mesmo inimigo”. We met a lot of people through it, people we’ll be working on in the future. The second one is quite special as it was launched during the Covid-19 crisis and gathered more than 90 tracks: “The Ghost Town Initiative”. We’ve been featured with many friends and all proceeds will be handed over at the CNT so they can redistribute them to French workers affected by the current situation. It’s an honor to be working with the CNT as this particular syndicate, founded in Spain in 1910 had a very important role in the period we are interested in. You may have seen that we put their name on the artwork of “Nosotros los Etxegiña”. Plus, I’ve been told the compilation has raised a lot of money. It’s a relief to know it’ll make a real impact.

How did you get into anti-authoritarian music?

I had the chance to grow up having an uncle who loved The Clash and an anarchist aunt. It’s a good start if your goal is to end up buying yourself “Songs about the Spanish Civil War” compilation CDs!

Would you like to spend some words about your musical project (influences, history)?

Etxegiña is a Black Metal band with melodic and epic inspirations whose main thematic influence is the Spanish Civil War. It was born out of a combination of factors, one being the wish of creating my own project. I had been in quite some bands without being the main composer or a founding member. At first, I only wanted to start a Black Metal project. Politics were not at the center of my purpose. I just needed to follow my personal sense of melody. I started to work with T. (a.k.a “Vague”), known to be the guitar player of Acedia Mundi & Epectase. We connected really quickly and wrote a lot in very short time under the poetic influence of some Rioja wine. I don’t know why but I started to think about the Spanish Civil War as a main theme for the band. Maybe because it’s not something Black Metal bands have done much in the past. They romanticize WW1 or WW2 a lot. One day it dawned on me. I knew I had to do it when I saw “The Silence of Others”, a documentary about the victims of the Franco Dictatorship that focuses on the 1977 law of amnesty that freed the political prisoners at a high cost: forgiving the executioners. To know that the police and political staff remained the same as it was under Franco, that a law was voted to put all of the atrocities committed by the regime under the carpet of time, it made my blood boil. That film really motivated me. Then I learned both my great-grandfathers had been either tortured or imprisoned by Franco’s regime. How hard it was for my relatives for being red. I chose the name “Etxegiña”, a Basque word meaning “builder” that happened to be the nickname of my great-grandfather Ciriaco Aranzabal, not only to honor the fallen and the wounded but because Etxegiña is not about stucking my head in the past for the sake of it. I need to build something out of all this mud. When you talk about these things people often use the phrase “it’s all in the past, the wounds have closed with time”. I disagree completely. The flesh has closed but the wound still stinks. It’s rotten inside. And no amount of perfume will make that stench go away. That is how the band was founded. I do not consider Etxegiña to be “just” a Black Metal project. It’s a personal adventure. One that leads me to through time, one that allows me to explore history, politics, poetry, iconography and music. In this why I am super kvlt. Because nothing is more kvlt than taking things seriously in this scene.

Could you tell us if and when we will listen to more tracks of the collective?

Of course! I’m actually a bit frustrated because I launched Etxegiña like a ticking bomb. We had planned two shows before recording anything or even started any rehearsals and I literally finished to write some of the lyrics two days before the first gig. We did a lot in very little time. At first, I really wanted to continue with that intense work flow but I feel better now that some time has passed. It’s a shame we couldn’t start the recordings of our future EP before the current lockdown measures. It took me a while but I just finished writing the remaining lyrics. So as soon as we can, we’ll record a 4 track EP including “Nosotros Los Etxegiña” and we’ll have the satisfaction of knowing we didn’t rush our first release. The good thing is that we’re already writing what’ll come next.

Why did you choose to use Spanish for your lyrics and why did you focus the project after the theme of the Spanish civil war?

Writing in Spanish is a very interesting literary exercise for me because I hadn’t done it before. And if I had to talk about the Spanish Civil War, I wanted to do it in my native language. There’s something special to me about the Spanish language. How it sounds. Its way to be melodic and aggressive. That feeling that it’s rooted in the soil. We are down to earth people in my opinion. That doesn’t exclude the fact that I’m considering of singing in French, in English and in Euskara. After all, it would be a nice way to underline the fight of the international brigades and the fact that there were concentration camps full of Spanish refugees in France. One of my great-uncles was born in one. 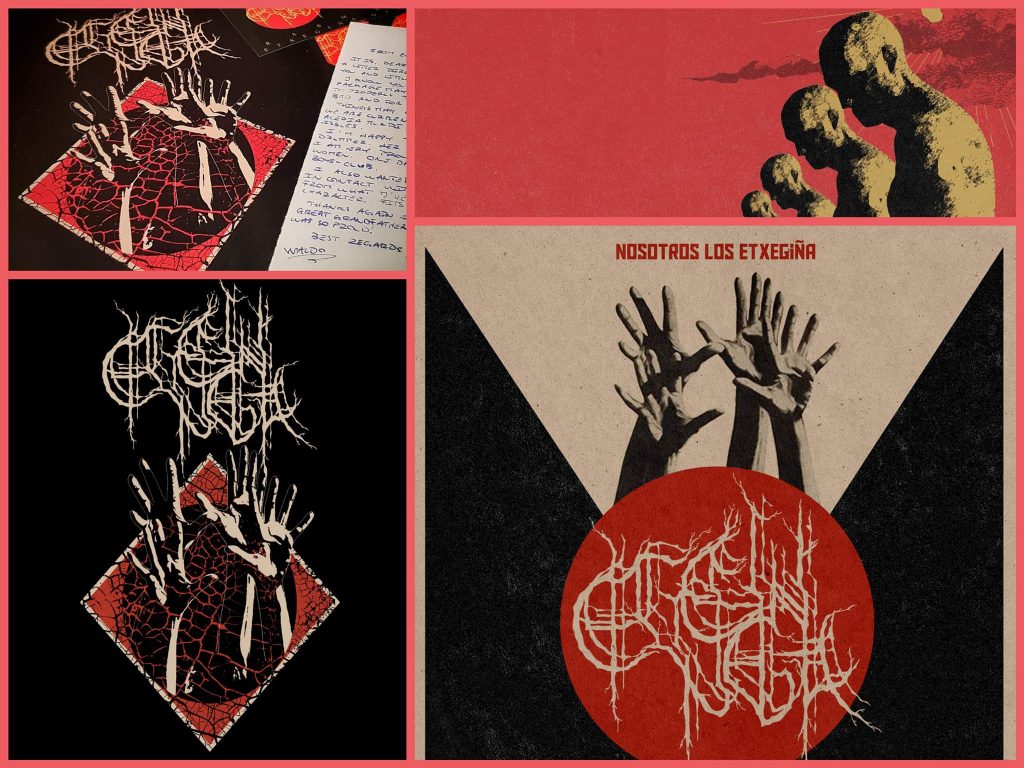 What kind of critiques have you developed during this Covid-19 emergency? Are you planning any future shows?

The lockdown has been a great occasion to end some of the books I wanted to read for Etxegiña. For every song there are sometimes hours of research. As I’m at the beginning of this adventure I want to take extra time to check that I’m not saying anything that isn’t true. I don’t mind romanticizing things as it’s a natural thing with music. But I want to be sure I can explain what meaning or what facts lay underneath my lyrics. These efforts are backed up by my aunt Maria who happens to be a historian. At the moment we are not planning any future shows. Not that I do not wish to perform our songs but I wish to focus on recording and writing more material so we can play at least 30-minute gigs in the future. Finding a drummer to record our EP will already be a challenge. So, I don’t know when we’ll be ready for touring again. I’d say the sooner the better, but I don’t want to rush things.

Thank you very much for your time and see you on stage and on the barricades… hopefully soon!

I’m grateful that you asked me those questions and I hope this interview can be the start of interesting conversations. Thanks a lot for your interest in the bands and I hope we’ll meet as well!